India dreams big, has courage to reach it

BENGALURU: Prime Minister Narendra Modi on Thursday said for the first time since Independence, a New India has emerged which has big dreams and also the capacity to realise them, and gone are the days when discussions in the country mostly centred around poverty and seeking foreign aid.

In his second visit to poll-bound Karnataka in less than 10 days, Prime Minister Narendra Modi on Thursday inaugurated developmental projects related to irrigation and drinking water, along with a national highway development project, among a bevy of other development projects valued at over Rs 10,800 crores.

Later, he inaugurated and laid foundation stones of development projects worth more than Rs 38,000 crores in different sectors in Mumbai.

Hitting out at the previous Opposition government, he said, “When it was time to invest in electricity, road and water infrastructure, the parties that were in power then gave preference to votebank politics; they saw every project and programme through the prism of how to convert the votes of a particular community into a strong vote base for them. The biggest loss because of this had to be faced by the people of Karnataka and this region.”

Pointing out the positive aspect of having a BJP government both at the Centre and in states, the Prime Minister said that “double engine government means double benefit, double welfare and double fast-paced development” and Karnataka is the best example of this.

“It has been 75 years of India’s development and now the country is marching ahead with a focus on the next 25 years. These 25 years are going to be the Amrit Kaal for every citizen and state, during which we have to build a developed India,” he said.

He said that India can be developed only when every citizen of the country, every family, every state get associated with this campaign.

Modi stated that this can be possible only when we learn from the bad experiences and wrong policies of the past decades and see to it that they are not repeated.

“There are examples of Yadgiri and north Karnataka before us; despite its potential, this region was lagging behind in the development journey. Earlier governments had declared several districts, including Yadgiri, as backward and shirked their responsibilities. The reason for this region lagging behind in development is the previous governments here did not spare time on thinking about how to get rid of backwardness from here, leave aside putting efforts towards it (development),” Modi said.

Yadagiri is part of the “Kalyana Karnataka” or the Hyderabad Karnataka region, as it was earlier known. These districts, which were under the erstwhile rule of the Nizams of Hyderabad, are among the most backward regions in the state.
Making it clear that the BJP government’s priority is not votebank, our priority is development, development and more development, Mr Modi said the country cannot be developed until even a single district is lagging behind in development.
“We have encouraged developmental activities that were declared backward by earlier governments,” he said. Mr Modi also complimented the Basavaraj Bommai government for the fast-paced development of the north Karnataka region.

In Mumbai, later in the evening, the Prime Minister inaugurated and laid the foundation stones of development projects worth more than `38,000 crores in different sectors, giving a big push to infrastructure, urban travel and healthcare ahead of civic polls in the megalopolis.

The projects include dedicating to the nation Mumbai Metro rail lines 2A and 7, laying the foundation stone for the redevelopment of Chhatrapati Shivaji Maharaj Terminus and seven sewage treatment plants, inaugurating 20 Hinduhridaysamrat Balasaheb Thackeray Aapla Dawakhana and starting road concretisation project for around 400 km of roads in the city.

In the Mumbai civic polls, the BJP and the Eknath Shinde-led Shiv Sena will seek to showcase these ventures to take on their political rivals. This was Mr Modi’s first visit to Mumbai after Maharashtra chief minister Eknath Shinde took office at the end of June last year, dislodging the Maha Vikas Aghadi  government. 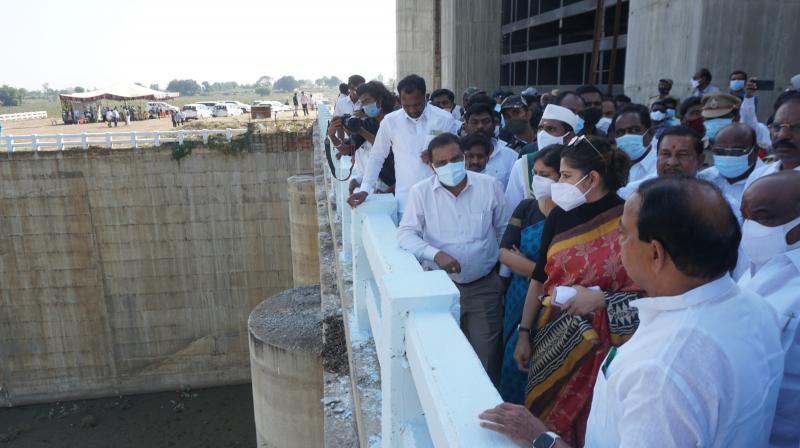